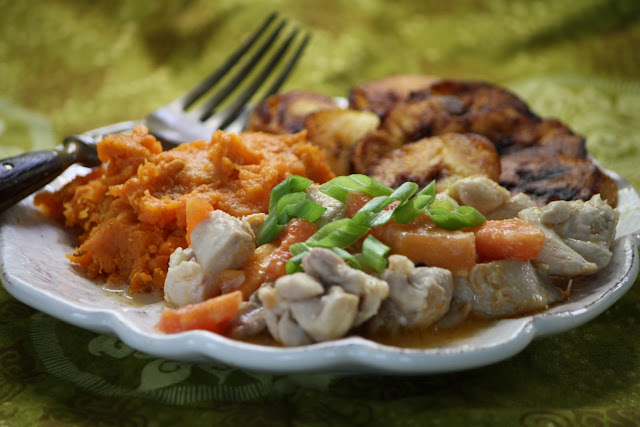 Just a few days left until we move to our temporary digs while the entire second floor of our house is gutted to the studs and rebuilt thanks to massive ice dam and water damage last winter. I'll still have use of my kitchen, but I'm not quite sure how consistently I'll be able to cook over the next few weeks. That said, I'm going to do my best to continue to cooking in the scheduled countries on my list, since aside from this project being my obsession, it most definitely helps keep me sane when life lobs me a steady stream of curve balls. Thanks a lot, life - I'm all set now. 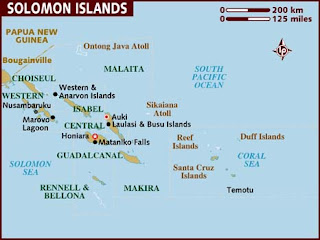 Located in Oceania, east of Papua New Guinea, Solomon Islands is a sovereign state that encompasses 1,000 islands. Descendants are made up of Oceania's 3 main cultural groups, Melanesia, Polynesia and Micronesia. Settled between 4,000-5000 years ago by people from South East Asia, this beautiful island nation was discovered by Europeans during the 16th century. Initially sighted by Spanish explorer, Alvaro de Mendana in 1568, he thought he'd discovered King Solomon's wealth when he discovered gold and so named the island, after King Solomon. Following the Spaniards, the islands were explored by the Dutch, French, Germans and British. Many of the islands became a British protectorate between 1893-1900. During WWII, the islands were caught in the cross fire of war, leaving the pristine islands littered with war wrecks. In 1978, Solomon Islands gained independence from Britain, but in 1998, tribal rivalries erupted on Guadalcanal which prompted Australia and other Pacific neighbors to intervene on its behalf, ultimately restoring the islands to peace in 2003.

Cuisine in the Solomon Islands is characteristic of food in the Pacific Islands, but also has some Spanish influences, as well as Asian and Indian spices, fruits and vegetables. Coconut, cassava, sweet potatoes, fruits, taro, bread fruit, beef and fish are all commonly eaten. Poi, which is taro pounded to a paste then mixed with water is eaten with many meals as well. 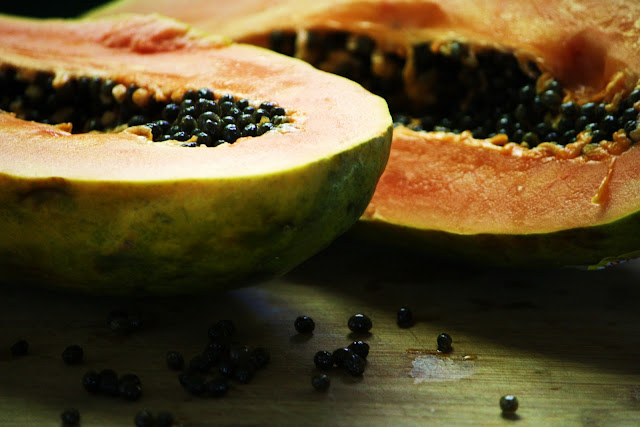 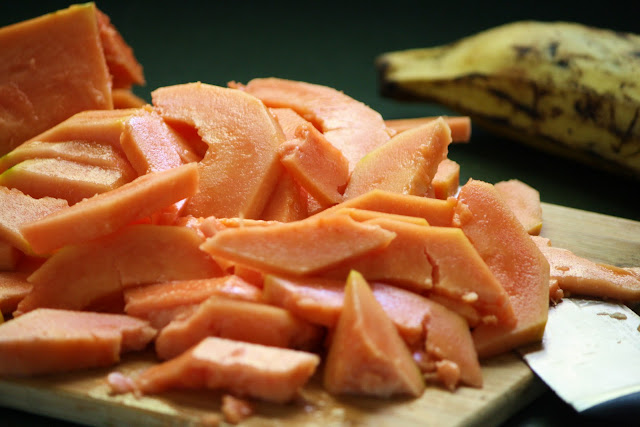 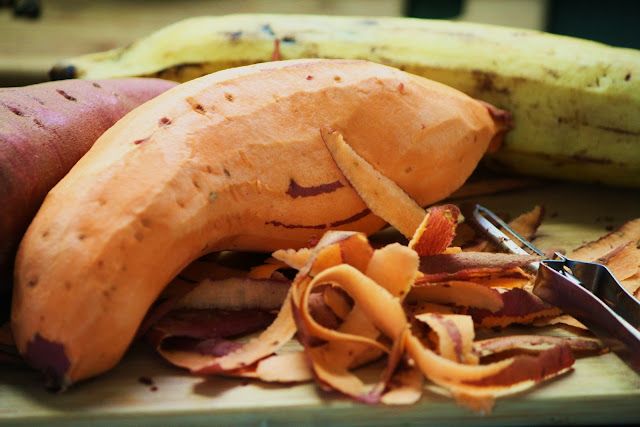 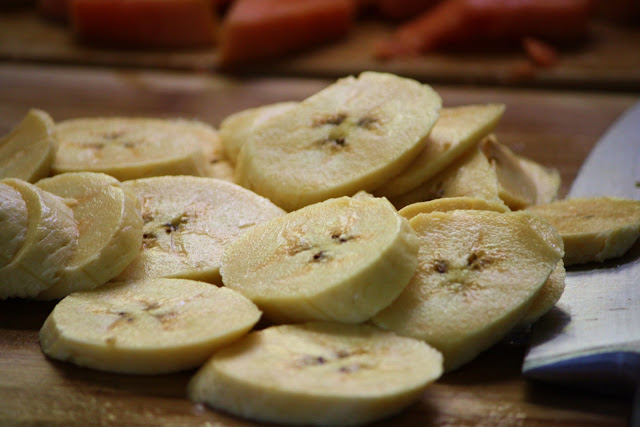 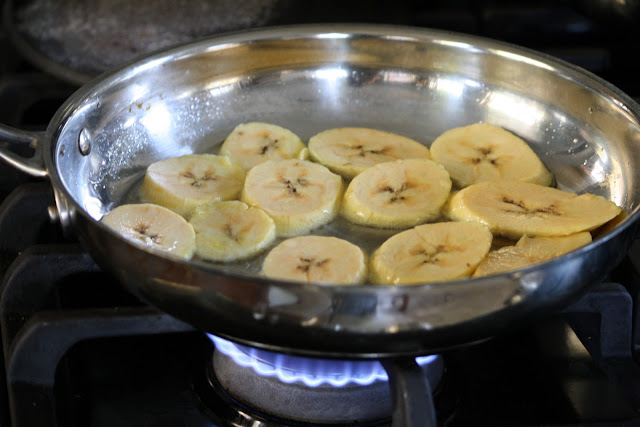 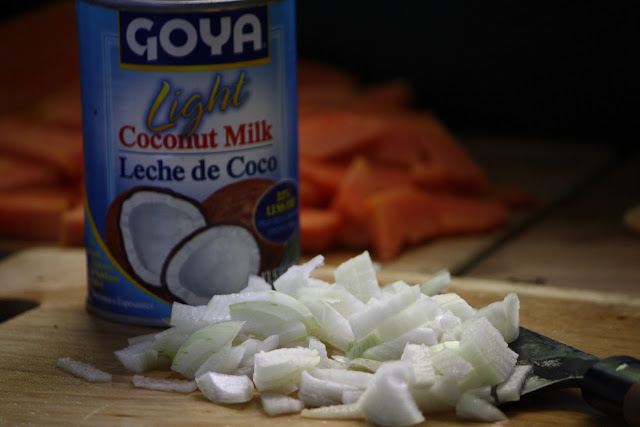 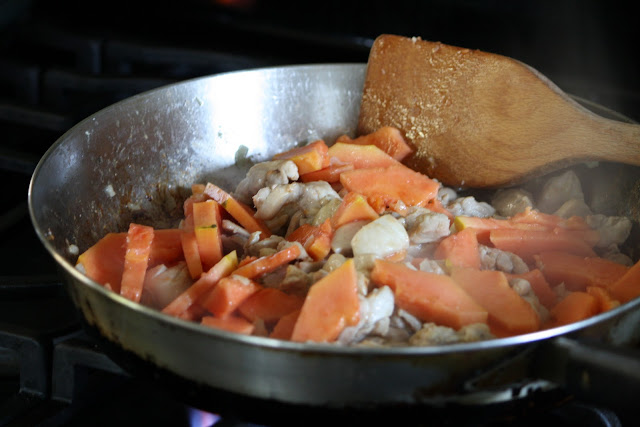 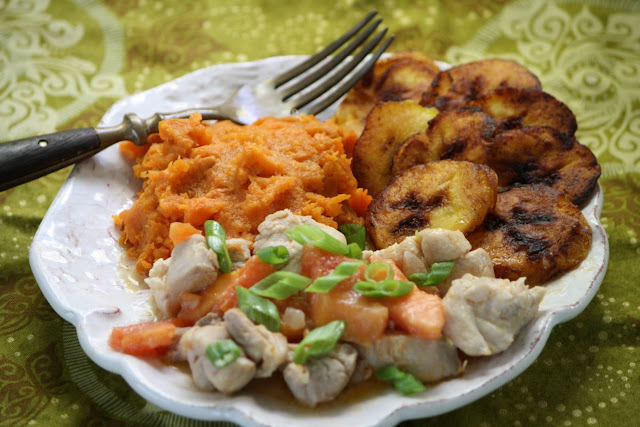 In a frying pan, heat the olive oil and cook chicken cubes over high heat until they are almost cooked (about 5 minutes).
Add the chopped onion and cook until the onion becomes clear, about 5 minutes.
Add the papaya slices and cook for 5 more minutes.
Remove mixture from heat and add the coconut milk.
Serve alongside mashed sweet potatoes and fried plantains.

Final Assessment:  This is a lovely, mild, slightly sweet dish, owing to the combination of papaya and coconut milk. I served the dish with mashed sweet potatoes and fried plantains. Very easy and very tasty!

That looks wonderful and those are ingredients that I can find around these parts! Great blog, Sarah!

Thanks, Laurrie...always appreciate the support :)

Hi sarah !! It has been a long time since i visited your website.For the First time i m seein bannan cooked in oil ..n veg mixed non veg .Awesome pics with new dish which makes me hungry too

Hi Sheril! Thanks so much - those are plantains (but the ripe, sweet ones) cooked in oil. Thanks for always being so generous with your praise...next time I'll be sure to include some butter pictures :)

Have to wait till bananas become more affordable.. just under $10 at the moment.

It was sweet indeed! Hope all is well in the Land Down Under!!

Butter again :)) double like !! Your praised coz of the efforts and passion in cooking is mind blowing !!ah i saw your fri comment mentioning $10 ?? omg here we get 5 bananas for $1.50

Many, many thanks, Sheril!You're lucky to live in a country where such delicious fruit is so inexpensive - here in New England, we only grow berries, peaches, apples, pears etc...no citrus, no tropical :(