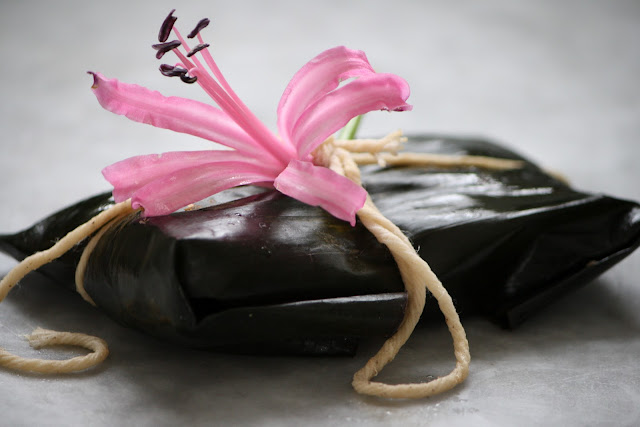 This recipe comes courtesy of my Ugandan friend, Josh, who has graciously shared his favorite dish. Josh and I became friends on Facebook through my blog and I'm delighted to be able to share both his recipe and the remarkable work he does. Josh is the founder of  Driving Change Youth Initiative, based in Uganda. Driving Change Youth Initiative is an initiative by and for young people from all backgrounds (both the privileged and non privileged), that aims to develop and unleash youth potential to bring about positive change into Ugandan society. As the co-owner of a Special Education Advocacy practice, Josh's commitment and work with children is near and dear to my heart. So, while I may never be fortunate enough to travel to Uganda, I am truly honored to be able to connect with Josh's culture by preparing his favorite dish, Ugandan Luwombo. Thank you, Josh, for your kindness and generosity ~ we LOVED the meal!

Located in east Africa, the beautiful country of Uganda is bordered by South Sudan (a brand new country), Kenya, Democratic Republic of Congo, Tanzania and Rwanda. Uganda is unique in that the eastern part of the country's Savannah meets the west African jungle. As such, the country's bio-diversity supports spectacular wild life ranging from plain animals like lions, to jungle primates and water animals such as hippos and crocodiles, not to mention over 1,000 bird species. A cultural melting pot with more than 30 different indigenous languages belonging to 5 distinct linguistic groups, the country's earliest inhabitants were hunter gathers who migrated to the south. By the 15 and 16 centuries, centralized kingdoms formed consisting of  Baganda, Bunyoro, Toro, Ankole and Busoga people. By 1894, Uganda became a British protectorate, and by 1962, Uganda gained independence.  However, by 1971, Prime Minister Obote's parliament was overthrown by Idi Amin Dada, who effectively amended the constitituion to take absolute power. A ruthless dictator, Amin and his army were responsible for hundreds and thousands of Ugandan deaths. Not until 1979 was Amin forced to flee the country by the Tanzanian army and Ugandan exile forces. However the country continued to be plagued by military rule and repression. Freedom, economic reform and relief finally came under the leadership of Yoweri Kaguta Museveni, allowing the people and the country to move forward and grow peace.

Although the Baganda are the largest population in Uganda, every tribe has its own culinary traditions, as well as Arab and British influences. However, bananas, plantains, stews, pastes, local fruits, peanuts (ground nuts), meat, fresh, smoked and salted fish, cassava, beans, sweet potatoes and spinach can all be commonly found, but might be cooked somewhat differently. The food is not typically spicy, but seasoned with tomatoes and onions to create flavorful, pleasing dishes, like this Luwomba dish I prepared tonight.

I used chicken thighs, but smoked fish, pork or any combination can be added to Luwombo ~ 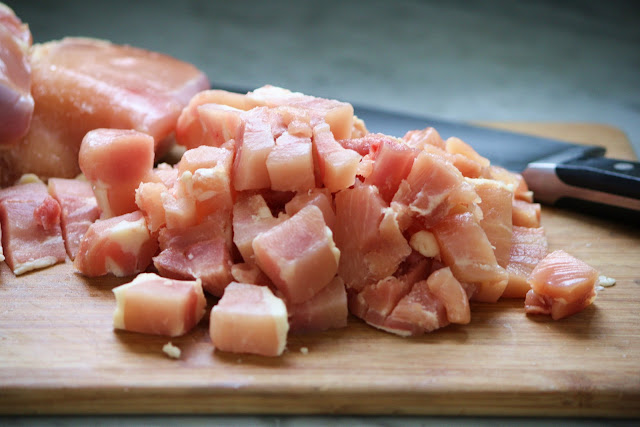 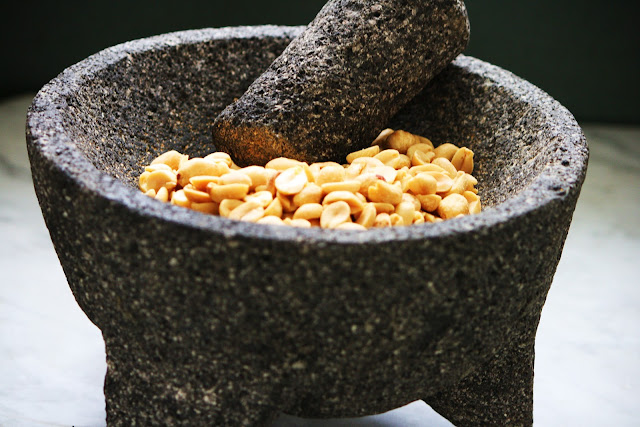 Tomatoes and onions flavor the sauce 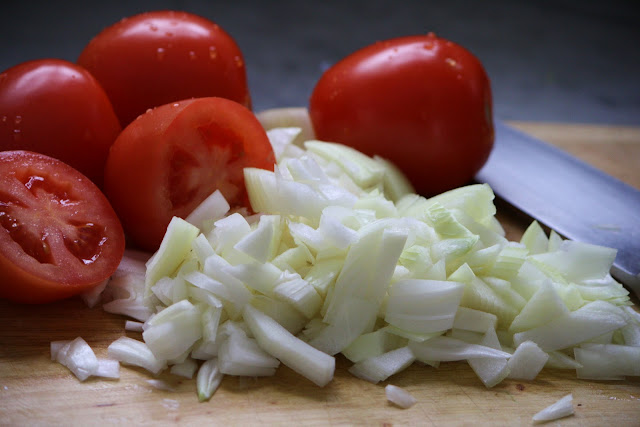 I added sliced fresh mushrooms, but these are optional 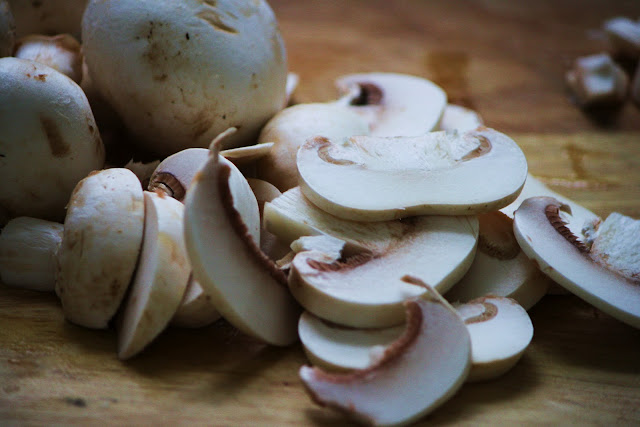 Plantains are cooked in the same pot. I chose semi-ripe yellow plantains because they're sweeter 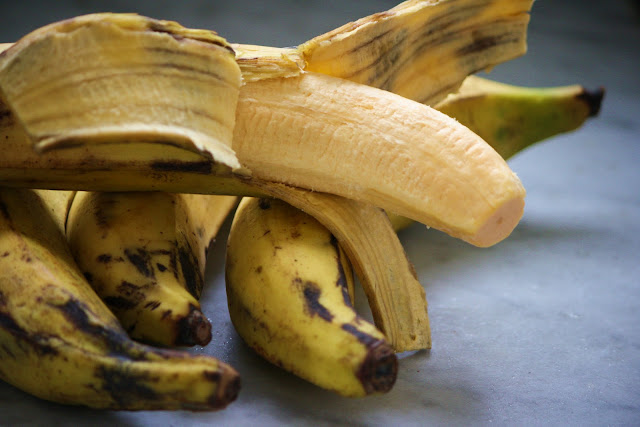 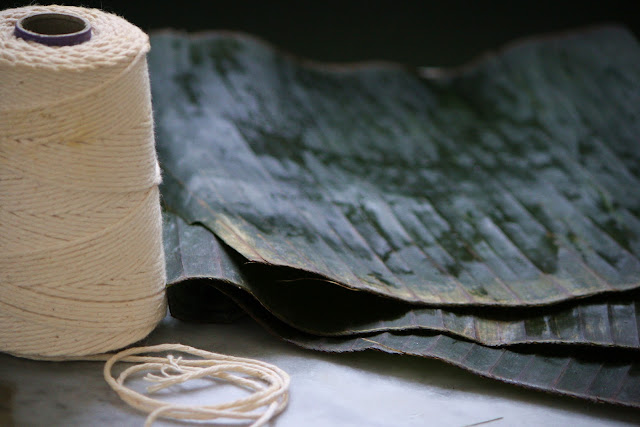 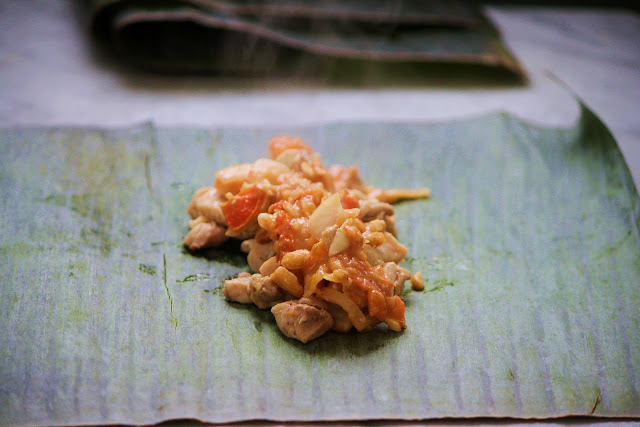 Fold over both sides, then either end to form a packet 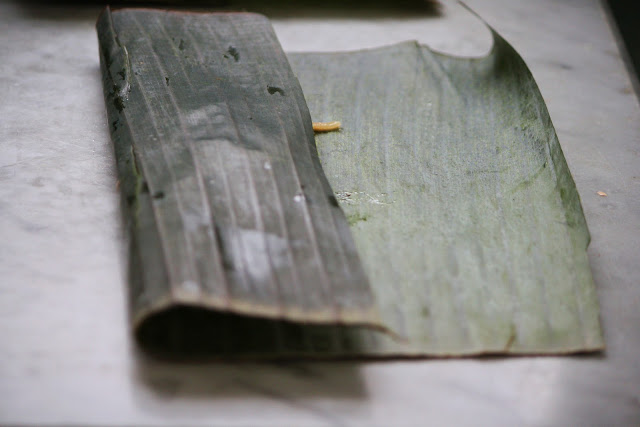 Tie with kitchen string, being careful not to tear the leaves 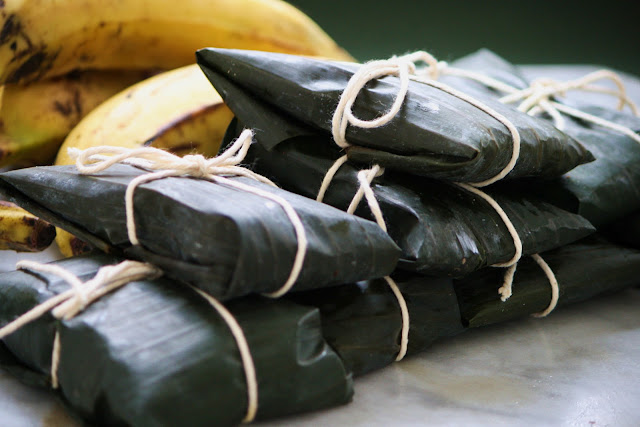 I put a steamer basket in the bottom of the pot, then added water to steam the packets 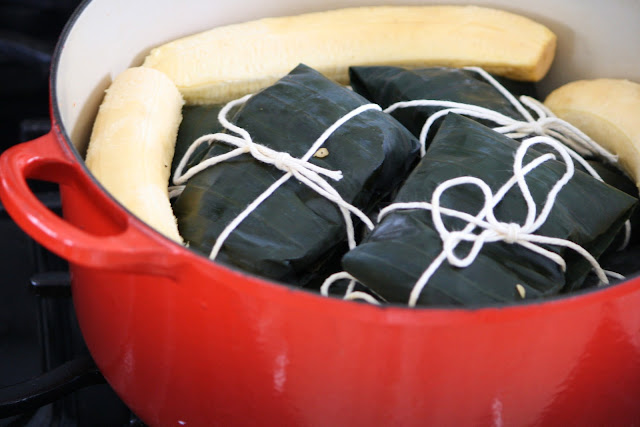 Open up the packet, mash some of the plantain and serve it up! Delicious and very filling! 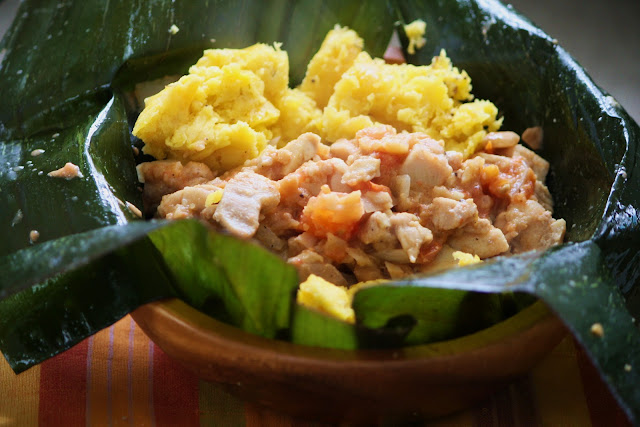 1.Cook the meat in an oiled frying pan until browned but not cooked then remove and set aside.

2.Heat a teaspoon of oil in a saucepan then add the onion and cook for a minute before adding the tomatoes, chicken stock cube, salt, pepper, peanuts, mushrooms and the smoked fish (optional). If necessary add a little water to form a smooth sauce. Cook to heat through.

3.Plunge the banana leaves in boiling water to soften them remove the mid-rib* and cut the ends off the leaves to form rectangles. Place a portion of meat and some of the tomato-onion sauce (and mushrooms and smoked meat or fish, if desired) in the centre of a leaf. If you buy packed banana leaves, most brands (like Goya) have already removed the mid rib for you*

4.Fold the leaf from the sides then wrap from the ends to make at least a double layer. Tie into a package with oven-proof string then repeat until all the mixture is used up.

5.Place a wire rack or trivet in the bottom of a large casserole dish then add water to the bottom of the trivet. Place the meat packages on top of the trivet and cover the dish. Bring to a boil and steam the packets for at least an hour. Add the plantains to the pot as well.

6.Remove the plantains from the pot and mash with a fork. Top with the meat and sauce from the banana leaves and serve.

Cool, Laurrie - Don't you think that's one of the best parts of our projects, connecting with other people? Of course you have an awesome and active RV following on FB as well. I can't wait to see what your friend sends you! Peace, my foodie Goddess.